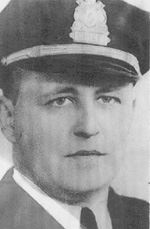 Chief Edmund S. Crowley 1942-1956 As the police department prepared to celebrate its 50th anniversary, the city went out of town to find a replacement for Chief Belden. The City Hall hierarchy looked one state over to Rhode Island, hiring a Providence sergeant to take the reins of the department. The city's third chief was credited for the modernization of the department during World War II and beyond. The installation of two-way radios in cruisers paid off in a short time with the arrest of a criminal whose description was broadcast over the air. Chief Crowley retired in March 1956.
Recruitment
Animal Control
Accident Reports
Damged/missing
Traffic Signs
Alarm Registration
Police Blotter
[]